Racial Violence in America and the Road to Justice and Reconciliation 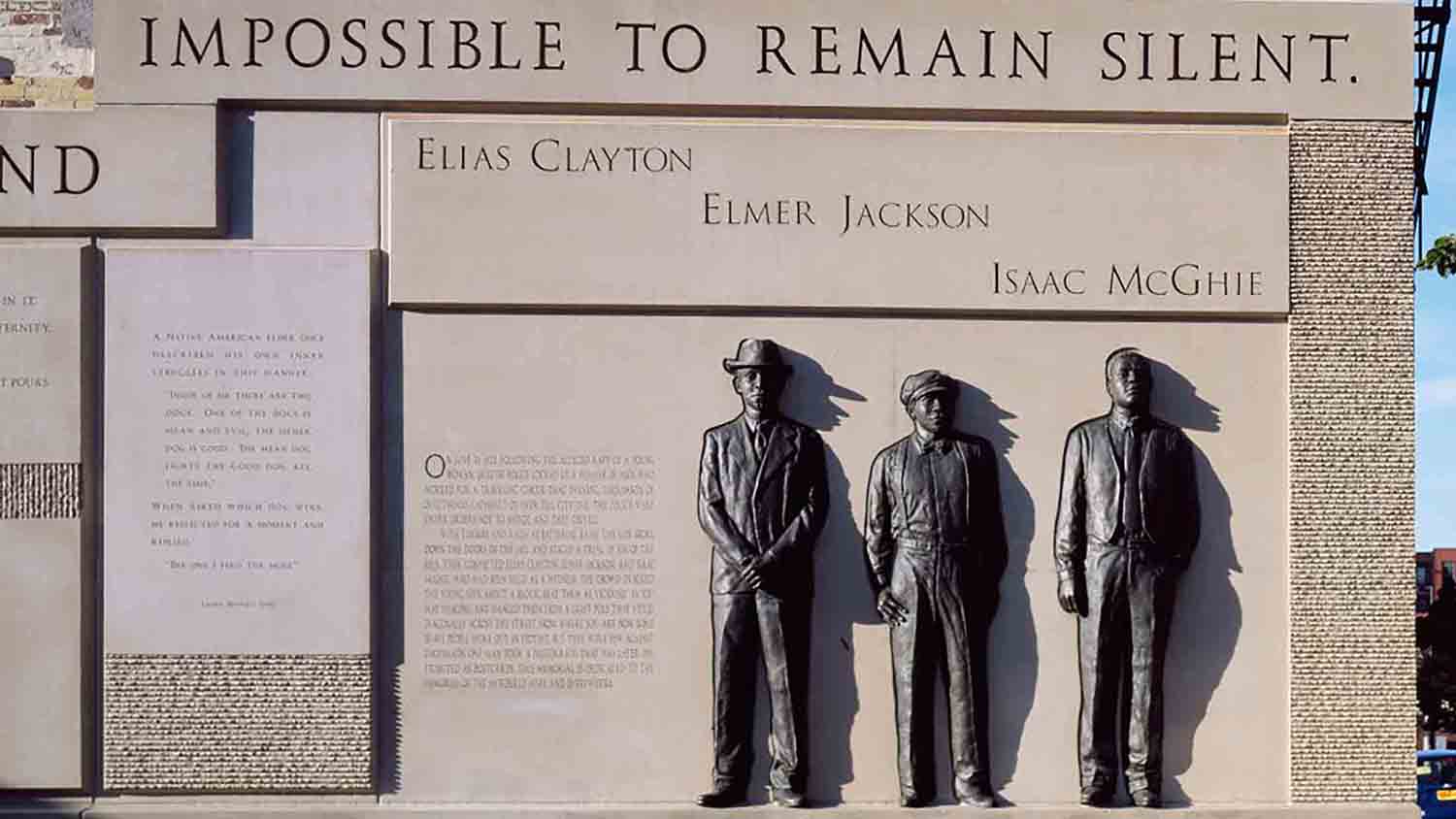 This virtual event commemorated one of the most horrific moments of racial violence in Minnesota history—the June 15, 1920 lynching of three young Black men, Elias Clayton, Elmer Jackson, and Isaac McGhie in Duluth—and examined the history of racially motivated violence and our efforts toward racial reconciliation.

The event featured Bryan Stevenson, renowned civil rights lawyer, and Founder and Executive Director of Equal Justice Initiative (EJI). He was interviewed by Jerry Blackwell, CEO of Blackwell Burke and one of the lead prosecuting attorneys in the trial of Derek Chauvin. The program provided a broad perspective on racial violence in Minnesota and elsewhere, and the need for truth, accountability, justice, and reconciliation. As such, it built on and complemented the Duluth-based program and events that was presented on June 13, 2021 by the Clayton Jackson McGhie Memorial (CJMM) to commemorate the lynchings.

Professors John Bessler, University of Baltimore School of Law and Georgetown University Law Center, and Duchess Harris, Macalester College, provided historical context about the legacy of lynching and racial violence in America. We also heard from U.S. District Court Judge Richard Gergel, whose book “Unexampled Courage: The Blinding of Sgt. Isaac Woodward and the Awakening of President Harry S. Truman and Judge J. Waties Waring,” revealed the heroic origins of the legal crusade to destroy Jim Crow and the entrenchment of racism through the tradition of states’ rights.

Presented by Professor John Bessler, Professor of Law at University of Baltimore, and Adjunct Professor at Georgetown University Law Center

Lynching is frequently associated with the American South—the geographic region where, after the Civil War and slavery’s abolition, so many racial terror lynchings took place. But lynching was not exclusively a southern phenomenon, and the Ku Klux Klan, with its grotesque ideology of white supremacy, had chapters in many places. Lynch mobs took numerous lives throughout the United States, with the Equal Justice Initiative documenting more than 4,000 African Americans lynched across twenty states between 1877 and 1950. Before the 1920 lynching in Duluth, a number of lynchings took place in the Midwest. In recounting the racial prejudice associated with American society and the law and its enforcement, including with respect to policing and the death penalty’s administration, this presentation on the history of lynching—the extra-judicial killing of human beings suspected of committing crimes—contextualizes the Duluth lynchings and what came to be known as “lynch law.”

The conviction of Max Mason for the alleged rape of a Duluth woman in the aftermath of the Duluth lynchings in 1920 was seen by many individuals as a miscarriage of justice that needed to occur to appease white residents in Duluth. In 2020, the Minnesota Board of Pardons issued the very first posthumous pardon in Minnesota history to Mr. Mason. During this presentation, Jerry Blackwell and Corey Gordon will discuss the pardon application to the pardon board, how the pardon occurred, and Minnesota Supreme Court Justice Dibell’s 1922 dissent in State of Minnesota v. Max Mason.

Considered one of the worst incidents of racial violence in the United States, the 1921 Tulsa Race Massacre left an estimated 300 people dead, 800 injured, and over 10,000 homeless. Despite the atrocity, it remains one of the least–known events in American history. In providing a historical account of the 1921 Tulsa Race Massacre, Professor Harris will discuss: (1) long term impact on Tulsa, (2) how the massacre fits within United States history from the Reconstruction era to passage of the Civil Rights Act, and (3) the implications that the historical omission has had on African American people’s feeling of belonging, being represented, and receiving equal protection under the law.

In 1946, Sergeant Isaac Woodard, a decorated African American World War II veteran, was arrested, beaten, and blinded while in custody by the local police chief, Lynwood Shull. An all–white jury acquitted Shull. United States District Court Judge Richard Gergel, author of “Unexampled Courage: The Blinding of Sergeant Isaac Woodward and the Awakening of President Harry S. Truman and Judge J. Waties Waring” provides a revealing examination of the hideous racial violence in the period after World War II, the heroic origins of the legal crusade to destroy Jim Crow, the deep entrenchment of racism through the tradition of states’ rights, and how this incident motivated United States President Harry Truman to establish the first presidential commission on civil rights, and inspired the presiding judge at the Shull trial, Judge Waties Waring, to become the first of the great southern civil rights judges of the post-World War II era.

CJMM was formed in June 2000 to keep alive the story of what happened to Isaac McGhie, Elmer Jackson, and Elias Clayton on June 15, 1920. Through their efforts, Duluth is now home to the first-ever memorial to Black victims of lynchings in the United States. CJMM’s ongoing mission is to foster racial justice and promote healing and reconciliation in the community.

Bryan Stevenson is the Founder and Executive Director of the Equal Justice Institute (EJI) a private, nonprofit law organization focused on social justice and human rights in the context of criminal justice reform in the United States. Founded in 1989, EJI litigates on behalf of condemned prisoners, juvenile offenders, people wrongly convicted or charged, poor people denied effective representation, and people whose trials have been marked by racial bias or prosecutorial misconduct. Mr. Stevenson is a prolific author. His book “Just Mercy: A Story of Justice and Redemption” was recently made into a movie. Jerry Blackwell, one of the lead prosecutors in the Derek Chauvin criminal trial, will interview Stevenson about his work, criminal justice reform, and how we all can and must change the narrative about race in America.Question & Answer with presenters, moderated by Kevin Lindsey, CEO, Minnesota Humanities Center

This event will also highlight the work of the Collaborative Legal Community Coalition (CLCC) and the Clayton Jackson McGhie Memorial Board (CJMM). The CLCC is a unique coalition of sectors of Minnesota’s justice system and legal profession in partnership with members of the broader community, founded to commemorate the 100-year anniversary of the Duluth lynchings and to support CJMM in its shared commitment to do the same. Beginning as a spark of inspiration from Jerry Blackwell and former MSBA President, Tom Nelson, the CLCC grew organically one member organization at a time, under the committed leadership of Chief Judge John Tunheim and with the support of Magistrate Judge Leo Brisbois.

The work of the CLCC has included the collaboration with Bryan Stevenson and the Equal Justice Initiative on the commemoration of the Duluth lynchings; the successful petition for Minnesota’s first posthumous pardon for Max Mason, who was wrongly charged and convicted of the alleged rape that was at the heart of the mob lynching of Mr. Clayton, Mr. Jackson and Mr. McGhie; compilation of an anthology of written, photographic, and artistic documentation and reflections on the Duluth lynchings and their commemoration; and partnership with the federal court’s Open Doors program and the Minnesota Humanities Center in their engagement with the educational community, including the development of literature and materials to support educational and curricular initiatives around these historical events and their present-day implications.

The June 14, 2021 virtual program is designed to be respectful of, and separate from, the Duluth CJMM program on June 13, 2021, which focuses on the 1920 lynchings themselves. The June 14 event is broader but complementary. It will allow Bryan Stevenson to offer additional thoughts and insights after his Duluth-based presentation on Sunday, and to provide a broader Minnesota perspective on racial violence and reconciliation in Minnesota history. Prof. John Bessler will discussion lynchings across the nation and Prof. Duchess Harris will provide analysis relating to the 1921 Tulsa massacre. Judge Gergel will share the events and legal case that formed the foundation of Brown v. Board of Education, and the event will conclude with a conversation with Bryan Stevenson on the broad topics of truth, justice and reconciliation.

Jerry W. Blackwell is the founding partner, CEO and chairman of Blackwell Burke P.A. Mr. Blackwell serves as national and trial counsel for several major corporations, having represented them in federal and state courts in 47 states and internationally. He is an experienced trial lawyer with nationwide experience defending class actions, toxic tort, commercial disputes, products liability, and other high stakes complex cases. Mr. Blackwell has numerous winning jury verdicts and favorable settlements to his credit. He is a frequent presenter on winning trial strategies and how to communicate complicated legal, scientific, and business issues to jurors.

Richard Gergel is a native of Columbia, South Carolina and is the grandson of Jewish immigrants who immigrated to South Carolina from Eastern Europe and the Ukraine at the turn of the Twentieth Century. He graduated from Duke University, B.A., summa cum laude, and the Duke University School of Law. Judge Gergel practiced law in Columbia for over 30 years, specializing in complex civil litigation. He was nominated to the United States District Court bench in December 2009 by President Barak Obama and was confirmed by unanimous consent by the United States Senate in August 2010. Judge Gergel presides in Charleston, South Carolina.

Judge Gergel is the author of two books and numerous articles on legal and civil rights history. His most recent book, “Unexampled Courage: The Blinding of Sgt. Isaac Woodard and the Awakening of President Harry Truman and Judge Waties Waring” (Farrar Straus and Giroux 2019), has received wide critical acclaim and was the basis of a recently nationally broadcast documentary on PBS. He is married to Dr. Belinda Gergel and they have two sons, Robert Richard Gergel and Joseph Gergel.

Mr. Gordon is admitted to practice in the state and federal district courts of Florida, Illinois, Minnesota, New York, and Wisconsin, as well as the First, Second, Third, Seventh, Eighth, Tenth, and Eleventh Circuit Courts of Appeals and the U.S. Supreme Court.

Professor Harris arrived at Macalester as an instructor and a visiting assistant professor in 1994, teaching courses in women’s and gender studies. In 1998 she joined the tenure-track faculty in political science and African American studies. She was tenured in 2004, earned a Juris Doctorate in 2011, and was promoted to full professor in 2013. Dr. Harris was also a founding member of the American Studies department and served as chair for eight years, including as its inaugural chair.

The breadth of courses Dr. Harris has taught is wide-ranging, and includes Foundations of U.S. Politics, Policy Analysis: Health Care in the United States, Black Political Thought, Race and the Law, and “The Obama Presidency.” Among the things she’s most proud of during her time at Macalester are the lifelong bonds she builds with her students in the classroom.

Bryan Stevenson is a widely acclaimed public interest lawyer who has dedicated his career to helping the poor, the incarcerated, and the condemned. Under his leadership, EJI has won major legal challenges eliminating excessive and unfair sentencing, exonerating innocent death row prisoners, confronting abuse of the incarcerated and the mentally ill, and aiding children prosecuted as adults. He led the creation of EJI’s highly acclaimed cultural sites, the Legacy Museum and the National Memorial for Peace and Justice, which opened in 2018. Mr. Stevenson’s work has won him numerous awards, including over 40 honorary doctorates, the MacArthur Foundation “Genius” Prize, and the ABA Medal, the American Bar Association’s highest honor. He is a graduate of the Harvard Law School and the Harvard School of Government and the author of the award-winning New York Times bestseller, Just Mercy, which was recently adapted as a major motion picture.

The United States District Court for the District of Minnesota

Justices of the Minnesota Supreme Court

The Law Firm of Blackwell Burke

The Jewish Community Relations Council of Minnesota and the Dakotas

The Minnesota Chapter of the Federal Bar Association

The Minnesota Association of Black Lawyers